Similar to the ever-popular Meccano construction sets, Ezy-Bilt Master Toy Construction Sets were Australia Made. It is or was a creative construction or building set and a copy of Meccano.

Identified on the lid of one of my sets as Manufactured by Colton Palmer Preston Ltd. Adelaide South Australia. Colton were a tool manufacturer in Currie Street Adelaide c1920.

At this stage I am making an assumption that this ‘Ezy-Bilt’ company is the same as the stated construction toy.

Lots of photographs relating to Colton, Palmer and Preston can be found at the State Library South Australia, but no photos that are toy related. One entry there is of an Ezy-Bilt Contruction Set which mentions Colton, Palmer and Preston as making Ezy-Bilt from the late 1940’s which is not consistent with the company formation identified above. The Powerhouse collection confirms the date period as 1948 to 1960 and specifies that one reason for the creation of the Meccano copy was the lack of supply from England.

Of note is that at least one book for Ezy-Bilt ‘The Master Toy’ Instruction Book for Sets 1 to 5 is marked as Copyright Ezy-Bilt Ltd. Kilkenny S.A.

At which point the Meccano Index in the UK comes up with a document that ties in with all the above information, expands on it, and confirms my assumption regarding the 1937 company formation.

In summary, the document suggests that George Irving was producing or at least selling Ezy-Bilt items from 1933. While the document provides some estimate at the dates, we now know that Irving converted, or undertook new investment, in March 1937. Colton, Palmer and Preston took over in the mid-1940’s until mid-1950’s when it is now showing as Ezy-Bilt Ltd Kilkenny South Australia.

From the Notes at https://collection.maas.museum/object/466906

Further research is needed to clarify the relationships, but I’d expect that Colton, Palmer and Preston had been the manufacturer for George Irving from the early days, and later took over direct marketing of the products. 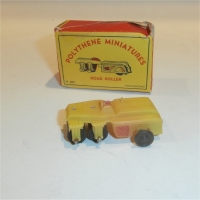