The Matchbox Yesteryears models in the G type box issued between 1969 and 1970.

The window box is basically the same as the F style with a purple band to the left instead of the earlier pink colour. 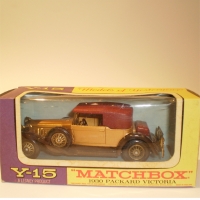 This Matchbox Yesteryear Y15 1930 Packard Victoria is in the purple stripe G box and it was originally issued with a backing card. Probably a USA retail pack the back of the box shows the signs of being glued to the card hanger.